Skin cancer is the most common of all cancers. Over 800,000 Americans develop skin cancer every year. Fortunately most skin cancers can be cured if detected early. Because the skin is the most visible organ in the body, every individual should take the time to learn about how to detect skin cancer in themselves and their loved ones.

The principal (not sole) cause of all the skin cancer is overexposure to sunlight. Both long-term chronic exposure and occasional intense exposures (especially with sunburns and blistering) have both been implicated as risk factors. Equally important is the type of skin you have inherited. A family history of skin cancer suggests that you are at increased risk. People with fair skin, red hair, many freckles or moles are at increased risk of developing skin cancer. Other factors that may put you at risk include: repeated medical and industrial x-ray exposure, scarring from diseases or burns, occupational exposure to such compounds as arsenic.

Prevention is a matter of guarding the skin against the known causes. Since the sun and its ultraviolet rays would seem to be the main culprit, the most effective preventive method is sun avoidance.

Precancerous Lesions  – What is an actinic keratosis? 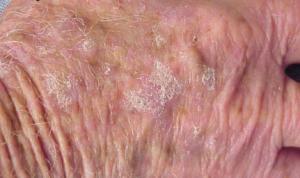 Numerous actinic keratoses on the hand.
Over the years, sun exposure causes skin damage that at first is invisible. As you age, the damage from the sun begins to show (so-called photodamage). Wrinkles and "sun" spots are common manifestations of photodamage. In addition, however, you may begin to notice small red, scaly patches on the skin. Some may disappear on their own, but most do not. These small scaly spots are most commonly found on the face and back of the hands in fair-skinned individuals who have had significant sun exposure. These spots may represent a type of skin lesion called an actinic keratosis. These are considered to be precancerous, because if they are not treated, some of them may become cancerous requiring more extensive treatment.

If they are diagnosed in the early stages, actinic keratosis can often be removed by cryotherapy (freezing), or by applying a topical form of chemotherapy. This usually works because actinic keratoses reflect damage in the top layer of the skin only (epidermis). If a skin cancer develops from an actinic keratosis, then surgery of some kind is usually required. If your dermatologist suspects that an actinic keratosis has become deeper and gone on to form a true skin cancer, he or she may choose to perform a small biopsy (skin sampling) to make a diagnosis.

Spread of cancer by the blood stream or lymph glands to other (distant) body sites. This is the mechanism by which many cancers can cause death.

Essentially another way of saying "cancer."

Basal cell carcinoma is by far the most common form of skin cancer. It usually appears as a small, fleshy bump on sun-exposed skin of the head, neck, back and extremities. this bump persists over time and eventually grows and may begin to crust or bleed. It is usually not painful at all in its early stages. Occasionally BCC may present as a flat, scaly area (superficial BCC), or as a whitish scar-like change in the skin (sclerosing BCC). Basal cell carcinomas seldom occur in dark-skinned persons. These tumors usually don't spread quickly and may take many months or even years to grow. BCC rarely metastasizes (spreads to other parts of the body), but it can extend below the skin to the bone and cause considerable local damage. BCC which has been ignored or neglected or those which have come back despite previous surgery may cause significant local damage and destruction. With time, BCC can invade into deeper tissues and even cause death if it invades important structures.

Because of its slow growth and rarity of spread to other parts of the body, most BCC can be cured, especially if diagnosed early. More problematic cancers may require more difficult approaches to treatment.

Basal cell on nose, cheek and lip (near the nose). 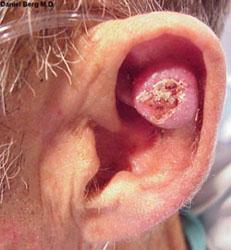 Squamous Cell Carcinoma of ear.
These cancers may appear as bumps (sometimes volcano-like) or as red, scaly patches. SCC is the second most common skin cancer found in Caucasians. It typically is found on the rim of the ear, the face, the lips, and mouth. It also is rarely found on dark-skinned persons. This cancer may grow quite quickly in some cases, although slow-growth (like BCC) is also possible. If untreated it may develop into large masses. It is considered potentially more dangerous than BCC because unlike BCC, it can metastasize. Most SCC (>95%) don't metastasize. Tumors that are larger, have recurred after previous surgery and that exisit in people whose immune systems are impaired have a higher risk of spread. There are an estimated 2,500 deaths from non-melanoma skin cancers (mainly BCC and SCC) every year. The cure rate for both basal cell and squamous cell carcinoma is 95 percent, when properly treated.

This is the most dangerous of the skin cancers because it more commonly metastasizes. Every year an estimated 7,000 Americans will die from melanoma. It is important to note that the death rate is at last declining, because patients are seeking help earlier. Melanoma, like its less aggressive cousins, basal cell and squamous cell carcinomas, is almost always curable in its early stages. Early detection is very important.

Melanoma comes from cells that make melanin (pigment in the skin). Melanoma cells usually continue to produce melanin, which accounts for the cancers appearing in mixed shades of tan, brown, and black.

Melanoma may suddenly appear without warning but it may also begin in or near a mole or other dark spot in the skin. For that reason learning how to perform skin examinations of your own body and eventually becoming aware of the location and appearance of the moles on our bodies is an important part of health and preventative medicine.

Excessive exposure to the sun, as with the other skin cancers, is accepted as a major cause of melanoma, especially among light-skinned people. Heredity may play a part, and also atypical moles, which may run in families, can serve as markers, identifying the person as being at higher risk for developing melanoma.

Dark brown or black skin is not a guarantee against melanoma. Black people can develop this cancer, especially on the palms of the hands, soles of the feet, under nails, or in the mouth.

Warning signs include: changes in the surface of a mole; scaliness, oozing, bleeding or the appearance of a bump or nodule; spread of pigment from the border into surrounding skin; and change in sensation including itchiness, tenderness, or pain.

A useful clue to whether or not you should worry about a mole are the following four features. They can be remembered as easily as remembering ABCD! 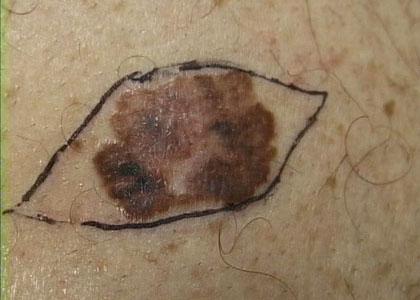 How Skin Cancer is Treated

If a biopsy (sample) of the skin reveals that an area of the skin is cancerous, more than one type of treatment or type of surgery may be effective. This depends on the type of cancer, features of the cancer and other variables related to the patient. In general what you want to knowas a patient is: 1) what is the cure rate of the different available procedures?, and 2) what can I expect with respect to cosmetic outcome, healing time and other aspects of the different treatments?. It is certainly true that the best treatment needs to be individually tailored to you.

Fortunately, most skin cancers are relatively easy to detect and most can be cured. Even malignant melanoma, if caught in its early stages, can be treated successfully.